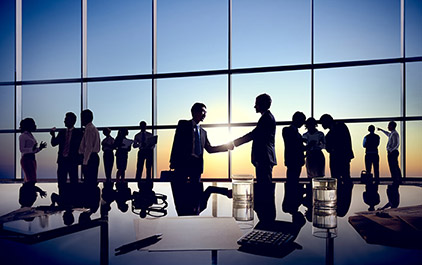 About GNR Advisors
GNR Advisors is an independent, middle market advisory firm providing strategic merger and acquisition advice, capital raising and special situations advisory. GNR provides services to entrepreneurs, owner/operators and business-owning families to help them grow, capitalize, or monetize their businesses. Our team is comprised of industry veterans from across the country, with deep industry knowledge. GNR Advisors will be able to provide advisory services to the energy and real estate sectors throughout the world. With various operating partners, the partnership allows GNR Advisors to capture synergies through each groups unique and vast energy network.

Through its relationships with Malhotra Group and other affiliates, GNR develops a sound base of global commodity, logistical/maritime and industrial knowledge normally not available to other advisory firms.

Our clients include private and public operating companies, financial institutions, asset holding companies, high-net worth families, and private equity/hedge funds. The technical discipline of providing well-grounded advisory services can only be obtained from a robust industry track record.

Mr. Rogliano’s career includes more than 14 years at The Pittston Company, a diversified mining, transportation and security company, where he held a number of senior level positions including CFO and Senior Vice President where he had direct operating responsibility for each of the company’s diverse divisions. While at Pittston, he helped develop and execute the strategic growth plan that substantially increased revenue and share price. He also led the company’s multimillion dollar expansion strategy, acquiring and integrating numerous companies worldwide. This, along with his direct management involvement in each division, resulted in a remarkable turnaround in corporate profitability in the mid-1990s.

Mr. Rogliano’s industry experience is diversified in both business-to-business and business-to-consumer operations, with extensive experience in supply chain management and managing multi-plant/facility businesses. Mr. Rogliano has a proven track record in developing and implementing growth strategies and has demonstrated success at attracting capital investment for both internal and acquisitive growth.
An international perspective, successful labor management experience, and strong leadership skills allow Mr. Rogliano to strategically and efficiently develop global expansion anywhere along the supply chain – from sourcing of materials to sales. He demonstrated this both at Pittston and as CEO of TransPacific Capital LLC, a global investment company engaged in investment banking, professional management, transportation, and mining operations. His global business and management experience spans numerous countries.

Mr. Rogliano also served as CEO of MAXjet Airways, an international startup all-business class airline. Mr. Rogliano led the company from the development of its ground breaking and much copied strategic business model through a multimillion dollar global financing strategy. In its first year of operations, the airline was selected as the 2007 number two international airline in the world as determined by Travel + Leisure Magazine.

Most recently, Mr. Rogliano was CEO of INR Energy, a privately held producer and exporter of high-volatility metallurgical and thermal coal. There he led the management and acquisitions team to secure an acquisition deal worth four times the company’s original investment in less than three years.
Mr. Rogliano is currently Chairman and Chief Executive Officer at NRI Management, LLC, a company formed from INR Energy’s management team. NRI is a global company pursuing investments in coal and other industrial minerals as well as mining and mining infrastructure assets..

Mr. Rogliano, a CPA, holds a B.S. in Accounting from Fordham University. His work experience also includes a partnership position at Ernst and Young in their National Tax Practice.

Mr. I. Steven Edelson has been Chief Executive Officer and Co-Chairman of R&r Acquisition IV, Inc. since November 2006. Mr. Edelson is a Principal and Managing Director at Mercantile Capital Group LLC. Mr. Edelson has been involved in finance and real estate industry for 18 years and has completed real estate transactions of over $3.5 billion in value. He has been a Principal, Co-Founder and an Advisor at Mercantile Realty Partners since 1997. Mr. Edelson was a Principal at Mercantile Capital Markets since 1997 and Mercantile Equity Partners. He served as the Managing Director at International Facilities Group where his responsibilities included development, financing oversight and lease and contractual negotiations for its projects. He has served as co-founder and now a non-Managing Director of International Facilities Group. At IFG, Mr. Edelson represented Dade County and a Committee of leading local businessman in their successful campaign to retain the Miami Heat franchise in Dade County. Previously, he was an Executive Vice President at Tishman Midwest Management Corp., where his experience included the completion of Chicago’s first privatization of a management contract for a public facility. Mr. Edelson was also involved in composing the winning bids to provide full facility management services at Harold Washington Library and at the International Terminal at O’Hare International Airport. He serves as the Chairman and Director of MAP V Acquisition, Inc. and MAP VII Acquisition, Inc. Mr. Edelson served as the Chairman of the Board and Director of Map VI Acquisition, Inc., until December 2007. He has been an Independent Director of Lawson Products, Inc. since November 2009. He serves as Director of iTRACS Corporation, Inc. Mr. Edelson is also a member of the Board of Governors of the Hebrew University in Jerusalem. Mr. Edelson is a Trustee at the Truman Institute for Peace. Mr. Edelson is a Trustee at the Truman Institute for Peace. He is the recipient of the 2005 Ellis Island Congressional Medal of Honor. In 2014, Mr. Edelson became an NACD Board Leadership Fellow.

Mr. Dyer has over 25 years of experience in the agricultural commodities sector. Steve has been mostly involved in the physical trading of most ag commodities. He has extensive background in risk management and trading of the commodity markets and currencies. Steve has also set up and managed several ag commodity trading companies with a successful track record. He has operational as well as management experience in the sector as well. Steve launched a small cotton trading company in the late 90’s which eventually was acquired by Macquarie Bank, which was the launching pad for Macquarie’s physical agricultural commodity space. Steve is the current Global Head of Marketing for Louis Dreyfus’ cotton division which is the largest physical cotton trading company globally. Dyer is an honors academic graduate of The Citadel.